The new chair of the Swim England Water Polo Leadership Group says he is excited about helping to deliver significant and meaningful changes in the sport. 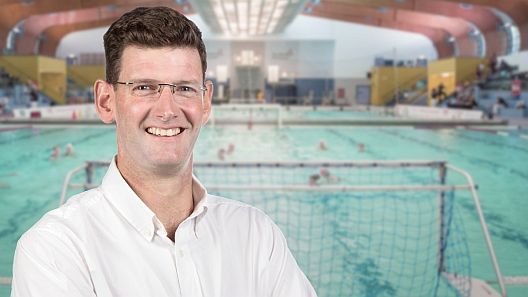 Toby King has been appointed to the post and replaces Ian Mackenzie, who was named as interim chair last October following Ian Elliot standing down from the role.

The Water Polo Leadership Group is tasked with providing input to the over-arching water polo strategy and annual plans, monitoring and overseeing their delivery and engaging with the community at large, including the regions and major stakeholders.

Toby first began playing water polo at university and has since played for Cambridge, Bedford and, most recently, Southampton Water Polo Club, which he co-founded. He also looks after the Hampshire veterans teams, helps coach at Portsmouth, is a grade C referee and officiates regularly in local and regional leagues.

Toby said: “I am really excited at being appointed as chair of the Swim England Water Polo Leadership Group as I am passionate about trying to bring our great sport to as many people as possible and to increase the profile of English water polo, both at home and abroad. There are lots of great competitions and clubs already around the country. I hope we can build on the excellent relationships we have with them all and provide more opportunities for people to enjoy playing water polo.

“I’m well aware that there have been some major challenges. Feedback from recent regional meetings highlighted communications to and from the community as an issue and I hope we can improve this significantly.

“I think the consultation sessions held recently by David Meli are a great start in understanding what needs to be done. My intention is that the Group will work together with David and others to produce a powerful, concise, strategy that reflects the findings of those sessions, as well as the Tunnicliffe report, and deliver a significant number of meaningful positive changes in the sport over the coming months and years.”

George Wood, Swim England Sport Development Director, said: “We’re delighted to announce the appointment of Toby as chair of the Water Polo Leadership Group. It’s been a period of change for the governance of the sport. The work David has already carried out has been significant and the regional meetings were well attended and raised a number of points which we’re keen to address. I know Toby is keen to get started and we’re looking forward to working with him to recruit members to the new-look Leadership Group, which will shape the future of the sport.”

Toby – who has spent his working life in small, high technology engineering companies in the UK and the US and is also a trustee of charities that encourage young people to take up careers in science, technology, maths and engineering – is keen to hear from water polo clubs, coaches, officials and players.

He can be contacted at toby.king@swimmingvolunteers.org.

The new-look Water Polo Leadership Group is now in the process of interviewing candidates for four voluntary roles ahead of meeting for the first time in March.