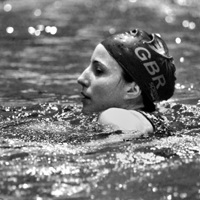 With Saturday 31 October 2009 marking 1,000 days to go until London hosts the 2012 Olympic Games, the stars of British aquatics are counting down the days until they compete in front of their home crowd in what is likely to be the biggest competition of their lives.

Preparations are already well under way in Stratford as the Olympic venues are being built, but the athletes’ work in the pool has been years in the making as they all aim to compete on the Olympic stage come 2012.

After returning from their most successful World Championships ever, the British Gas Swimming squad will be looking to improve further upon their performances as they get closer to the Olympic Games. In Beijing, the team secured six medals in the pool and open water and they will be looking to continue their success through the next three years.

Women’s Water Polo captain Ros Griffiths (pictured) led her team to the gold medal at the LEN European B Nations Trophy in July and is determined to see the team competing in London. Despite a funding cut at the beginning of the year the team are more focused on their dream of becoming Olympians. With some good results in the past few years and some young players coming through the ranks the team look in good form as they edge closer to 2012.

“It’s so exciting to think that in 1,000 days time we could be in the Olympic Village making the final preparations for a home Olympics,” said Griffiths.

“It’s going to be amazing to compete in front of a home crowd and all of the team are looking forward to it. Winning the LEN European B Nations Trophy earlier this year has made us more determined to keep working hard and be there in London in 2012.”