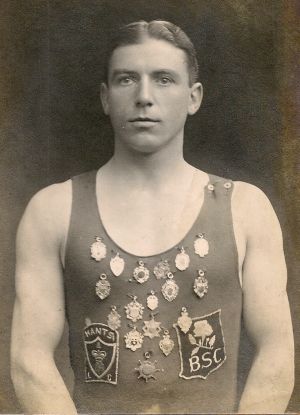 David Mullins writes: "Harold Richard Victor Percival Mullins (pictured) was born in 1887 in a pub in Southampton. His father disappeared to Australia before he was born and his mother died a few years later from pneumonia on a boat trip around the Isle of Wght.

"Harold was brought up by his grandparents who lived a few doors doors down from Pinnocio's on Poole Hill Bournemouth. He served his apprenticeship as a cabinet maker at JJ Allens of Bournemouth.

"He became a member of Bournemouth Swimming Club where he joined the waterpolo team and was also a member of Westover Rowing Club.

"Harold was responsible for building a lot of the beach huts on the seafront. A keen sportsman taking up bowls and playing the odd game of snooker in later years, the daredevil finally lost the sight in both eyes after after falling from an apple tree in his orchard when he was in his mid seventies.

"Three generations on he would be very proud of his great grandson Jackson, especially following in his footsteps with swimming and waterpolo for Seagulls SC, especially the latter and his recent Dorset League triumph."

Keep sending in your archive photos and memories of Dorset Water Polo over the years to admin@dorsetwaterpolo.org.