Any attempt to document history will always be work in progress. We are grateful to Bob Holman and his fellow contributors for the research undertaken to produce the article below. We welcome the opportunity to publish additional information and archived images.

Water polo has been played in Dorset since the latter part of the 19th Century. Indeed, the very first historic game ever played was on 13th July 1876 off Bournemouth Pier between seven “competitors” on each side. The goals were marked by four flags and positioned to the west of the pier 50 yards apart. After a “severe struggle the ball burst but the players were undaunted and went on to display their aquatic accomplishments for some time”. Another fixture was held a week later where again the India rubber ball (inside of a football) burst in a game, which was described as “aquatic handball”.

Of course in those days, Bournemouth was part of Hampshire but since the early 1970’s it has become a Dorset town with the club, which was formed in the 19th Century,  now competing in our Dorset Water Polo Leagues as well as the Hampshire league. Bournemouth's Harold Mullins (pictured right) was a colourful character.  His great grandson now plays for Seagulls.

Another club with a long history of the game is Bridport, which according to the Bridport News was certainly playing regular games in the River Brit in the earlier part of the 20th Century. A Swimming and Water Polo Club (men only) had started in Bridport in 1898. We have reports that in 1903, during the Bridport Regatta, a Dorset & District League match was played resulting in Bridport narrowly losing to Yeovil 2-1. In their first match of the season in 1906 Bridport lost 4-6 to Weymouth and there were various games played between the residents and visitors. In 1910 two thousand spectators turned up to watch the town team play Frome.

Great Britain were the Olympic champions on four consecutive occasions in the early 1900s at a time when there were teams from Weymouth, Bovington, Bridport, Poole, Portland, Whiteheads, Swanage, Lyme Regis and Wareham competing locally. 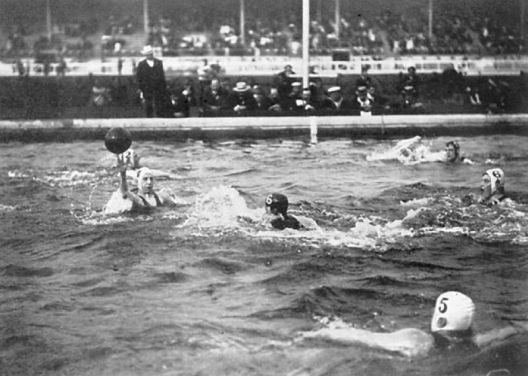 We can only assume that water polo continued to flourish when the soldiers returned from the First World War because when the Dorset County Amateur Swimming Association was formed in 1931 it paid for a senior men’s championship shield which is still competed for today. The first winners on this trophy were Bridport, the only time the town lifted the championship.

After the Second World War, Portland became the supreme force in Dorset water polo winning the championship shield 21 years on the trot. Weymouth also had a strong water polo side during this time and there was a great deal of local rivalry. It was also a time when water polo was the main event and the crowd was attracted to the game more than the swimming gala, which often preceded it. Weymouth went on to win in 1971 and 1972. John Restorick was in those championship-winning sides and he was to play again when it was revived more than 30 years later.

Bridport, another leading club at the time, ran three teams and had regular visits from clubs like the mighty Cheltenham and Weston-super-mare and touring London sides. "The Dorset team consisted of six from Portland and me," Dave Hoskins told Roger Guttridge. "Portland played in the harbour and you had to carve your way through the oil from the ships. It was a dreadful experience. But it was also terrific to have deep water to play in. At Swanage, you had to walk miles off the beach to find water deep enough to play in and the referee was in a boat at the side. At Bridport, we played in the mouth of the River Brit at West Bay. They could put a pitch in the harbour and because it was a holiday place, we used to get huge crowds watching and collect money in tins. It made Bridport a wealthy club and able to outbid other clubs in the annual auction to host county events. There was strong social side with a visit to the pub or dancing on the promenade at West Bay afterwards."

Sometimes, Dorset’s water polo players had more than their opponents to contend with. During one match at Bridport, a dead sheep floated into the playing area and on another occasion a dog decided to jump in and become one of the players. Dead rats and angry swans were among the hazards at Wareham. Winds, waves and tides also influenced play. David Grounds remembers playing for Wareham in a rough sea outside the Cobb at Lyme Regis. "As I tried to defend the goal, I was looking down on the home team’s forwards and the next second looking up as a wave took the same forwards 10 feet above me," he told Roger Guttridge. "The sea was so rough that they had to get boatmen to tow the pitch – an arrangement of ropes and goals supported by corks – inside the Cobb to restart the match."

The Dorset League was at the time a flourishing annual competition with teams from Bridport, Portland, Weymouth, Wareham, Lyme Regis and Swanage taking part. The sport continued to flourish through the post-war period. By the beginning of the 1970’s, new indoor pools were being built in most major towns in the county and indeed all over the country. Ironically, this contributed to the decline of water polo as the river and the sea was no longer so attractive to play in. It meant also that for those clubs that still played the game in swimming pools, their playing time was often relegated to less sociable hours with games and practices often ending at 10pm. "‘Once the big teams had swimming pools to play in, the prospect of coming here and swimming in the river wasn’t so attractive," Dave Hoskins told Roger Guttridge. "It’s strange but I think swimming pools really killed it off." 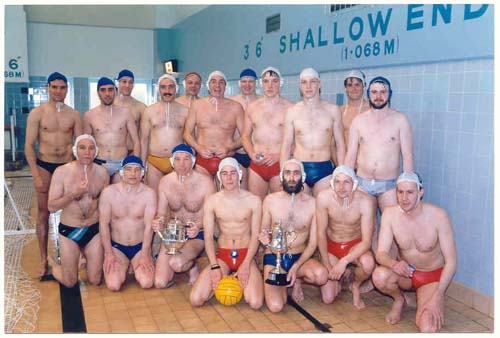 All through the 1980’s and 90’s, Bournemouth continued to play in the Hampshire League and still does today. However, from around 1972, the Weymouth and Portland clubs only played the odd game and some players went off to play for Yeovil just over the Somerset border. Bridport continued to play in the River Brit until the 1990’s when the Health & Safety brigade deemed it unsafe to swim in a polluted river. The mere fact that swimmers and players had taken to these waters for the past 100 years without harm seemed beyond their comprehension!

However, in the mid 90’s there were the “green shoots” of revival, as the Wessex Water Polo Club reformed in 1983 started to play in the Wiltshire league and then in the Bristol & West league, winning promotion to Division One in the 1994/95 season. The club reformed in 2001 becoming Weymouth & Portland playing in the Hampshire league and becoming either winners or runners-up many times. It is also now is a major player in our Dorset leagues

In the 1990’s Bridport were by then starting to play regular games at the new local leisure centre and after the millennium were to resurrect water polo at West Bay, by playing in the newly reconstructed harbour. 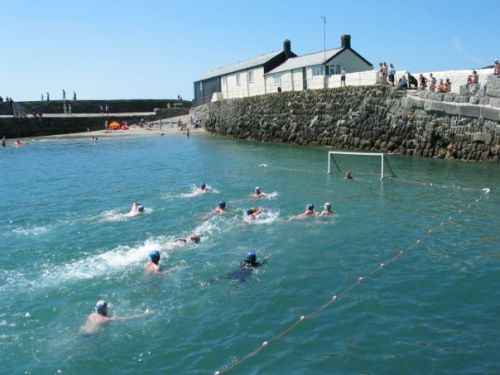 Weymouth & Portland Water Club were renamed in 2002 after the Weymouth and Portland clubs had earlier joined to form Wessex, to become one of the most successful clubs on the South Coast. Competing in the Hampshire League, the club were champions in 2004 and runners-up in 2003, 2005 and 2006.

"Portland at one point had six teams on the island," said Dan Kinsey, Weymouth & Portland's player-coach, "so it is good to keep that history going. I think it will be a sport that will grow and continue to grow."

In 2004/05 a group of water polo enthusiasts under the umbrella of Dorset County ASA met and decided to run a number of mini polo taster sessions. These proved very popular with around sixty youngsters turning up on each occasion. Encouraged by this positive response, they decided to form four leagues: Key Stage 2 (11 & under), Key Stage 3 (14 & under), Junior (under 18) and senior. It was the first time since 1972 that the senior men’s competition had been competed for. Happily, the mini-polo league contributed to a revival and Dorset County ASA’s 75th anniversary festival culminated in the first Dorset water polo final for many years.

The formation of the Dorset mini polo and water polo leagues has been a huge success. Recently a Ladies League has been added and a from a small base of around 30/40 players playing the game 4 years ago, we now have 300 to 400 people participating. A delightful aspect of this growth has been the number of girls taking up the sport for the first time.

On top of this, our development team led by Fred Fowler has been extremely busy encouraging and running mini polo sessions in schools and leisure centres and we now have hundreds of school children playing the game on a regular basis Today, we have teams from across the county not only competing in our domestic competitions, but also in regional tournaments. New teams such as Christchurch & New Milton Seagulls have embraced the game and Blandford has returned to the fold after many years' absence.

Since 2008, the County has competed in a number of regional competitions and has  also revived an annual challenge match between our near neighbours, Devon.

There is still much to do and as the standard of play has risen enormously, so have our ambitions. We see this has a first step to our players playing on the national stage. Indeed, Weymouth & Portland has already had some experience in playing in the National League. Who knows, one day we may even have players playing for their country. That would indeed be a day to savour!