For the first time in over 35 years Dorset has formed a County Water Polo team and taken on Devon in two challenge matches. Dorset's Bob Holman reports on the games for the new Inter-County Challenge Cups for the Junior Men's Under 17s and the Senior Men's played at the Pyramids Leisure Centre, Exeter on 24 Feb 08 and featured on Westcountry ITV's Sports Focus on Friday 29 Feb:

The two Dorset squads guided by coaches Dan Kinsey and Mick Flaherty were only formed recently and the games were a huge challenge as the County was playing sides truly at the top level with many of the Devon players either playing for GB or in Division 2 of the National League.

In the Under 17s Devon raced into a 2-0 lead but Niall Laming, the Dorset captain, pegged one back for the visitors in the first quarter. At the end of the second quarter Devon were 5-2 ahead and their strong squad began to really assert its strength in depth in the third quarter, scoring a further 7 goals with Dorset’s Arran Laming replying for the visitors. The home side continued its dominance in the final quarter and ended the game with a 19-3 advantage. 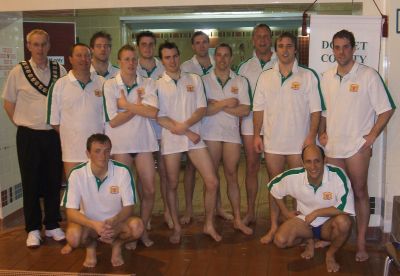 The senior game was also a tough baptism for the Dorset side with Devon racing into a 4-0 lead by the end of the first quarter. In the second quarter, the Dorset team found its rhythm scoring three goals but again, the superior strength in depth of the Devon squad told and it added further scores without reply until in the final quarter Dan Cooney managed to nudge the ball over the goal line after a partly deflected shot by Dorset captain Dan Kinsey. In his first representative game Dorset goalkeeper Kester Sheppard showed excellent form making many fine saves. The final score was 15-4 to Devon.

Both Dorset coaches said that their teams could take a lot of pride from what they had achieved as they had played two sides at the top of their game. The County is making huge strides in the water polo world and will only get stronger by playing top sides.